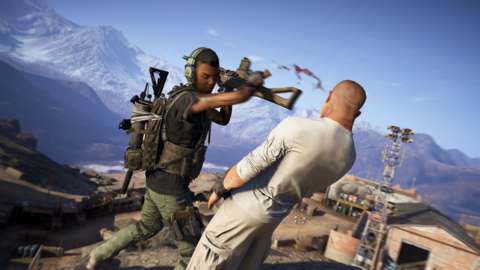 The NPD Group today released its report for March 2017, revealing the top 10 best-selling games of the month for the United States and other key industry facts.

Ubisoft’s Ghost Recon: Wildlands was the best-selling game overall during the five-week reporting period that ran February 26 through April 1. This is the first reporting period to include Sony’s Horizon: Zero Dawn, which launched on February 28. Sony’s PS4-exclusive landed in the No. 4 spot for March, behind Mass Effect: Andromeda (No. 3) and The Legend of Zelda: Breath of the Wild (No. 2).

You can see all of the top-seller lists NPD shared below. As is now the case every month, these lists are ranked by US dollar sales and combine physical sales with digital sales from select publishers (absences include Nintendo and Sony). All figures in this post do not cover the entire industry spend.

This uptick in sales is notable, as total physical sales had previously declined every month for the past year months.

For hardware specifically, the Nintendo Switch outsold the PS4 and Xbox One in March. Total US hardware sales “almost doubled” Naji said, rising to $485 million.

“March 2017 will go down in history books as the month Nintendo broke records,” Naji explained. “The Nintendo Switch had the biggest hardware launch for a Nintendo platform and the second biggest launch for any video game platform since 1995, the time NPD began tracking this category.”

The Switch sold 906,000 units in the US during March, which is 31,000 more than Nintendo’s previous record-holder for first-month sales–the Game Boy Advance back in 2001.

Specifically, the Switch’s Gray model was the best-selling console of March 2017, followed by the Neon Red/Blue version.

As Nintendo itself announced, Breath of the Wild sales have reached 1.3 million units across Switch and Wii U. The Switch version sold over 900,000 physical copies, giving the game an attach rate of 99 percent for Switch hardware. “This is the highest attach rate for any non-bundled title for a new gaming platform since NPD began tracking in 1995,” Naji said.

As for te month’s best-selling game, Wildlands, is had the best launch of any Ghost Recon game ever, Naji said. It’s not the best start for a Tom Clancy game, however, as that distinction goes to The Division.

The highly anticipated Andromeda, which finished March in the No. 3 position, failed to eclipse Mass Effect 3, which continues to hold the record for best launch, according to the NPD. And as for Horizon: Zero Dawn, the month’s fourth best-selling game, it was developer Guerrilla’s “best launch ever,” Naji said, noting it sold “twice as much” as PS4 launch title Killzone: Shadow Fall, the previous record-holder.

Horizon Zero Dawn was the fourth best-selling title for the month. Developed by Guerrilla Games, this was the developer’s best launch ever, selling twice as much as its next best title, Killzone Shadow Fall.

Titles marked with an asterisk do no included digital sales

Nidhogg 2 Gets Pre-Launch Gameplay Trailer Ahead of August Release

Final Fantasy Dissidia NT is exactly what it should be