We now live in a post-Avengers: Endgame world, which is a weird thought. A decade of storytelling all led up to one massive final chapter, and now it’s just out there for the world to experience. With Endgame in theaters and destroying box office records, there’s plenty to discuss. This will be your one and only warning: The following contains major spoilers for Avengers: Endgame. If you haven’t seen the movie, please stop reading now.

Avengers: Endgame isn’t a perfect movie. In fact, it’s far from it. There’s plenty of criticism for the film going around, from the way it treats Black Widow (Scarlett Johansson) to how it concludes Captain America‘s (Chris Evans) story. And all of that criticism is valid. I see these same issues and wish they were handled so much better. As fans of this franchise, viewers watched a decade of films and came to care about these characters in major ways.

That said, there is one aspect of Endgame that is handled perfectly, and it’s one of the most important pieces of the Marvel Cinematic Universe puzzle. When it comes time to finally rid the galaxy of Thanos (Josh Brolin) with one final snap of an Infinity Gauntlet, it doesn’t come from the radioactive Hulk (Mark Ruffalo), the super soldier Steve Rogers, or the god of thunder Thor (Chris Hemsworth). Instead, it comes from the man that started it all, Tony Stark (Robert Downey Jr.).

Tony being the one to ultimately defeat Thanos is not only the right call, but it’s the only one that makes sense. Since Iron Man hit theaters in 2008, Tony has been the center of this superhero universe. He may be sarcastic, egotistical, and kind of a dick most of the time, but he’s also been the most relatable character throughout the majority of the franchise.

Throughout the first 10 years of the MCU, audiences have gone through an emotional rollercoaster of a journey with Tony, as he experienced the highs and lows of choosing to become a superhero. In the aftermath of his kidnapping in the first Iron Man film, Tony gave his life over to the cause of being encased in armor as he fought villains from this planet and others.

Sure, being a superhero fed into his ego, but along the way, we also saw how it nearly destroyed him on a regular basis. At the climax of Marvel’s Avengers, Tony went into a wormhole and saw a corner of distant space that his brain could barely comprehend. The knowledge of how helpless he and Earth could be in the face of threats from throughout the galaxy drove the character forward in a heartbreaking way.

Iron Man 3, which is wildly underrated as a character piece, showed the aftermath of Avengers 1 in ways no other MCU movie did. While Thor: The Dark World and Captain America: The Winter Soldier continued to expand the larger story of the MCU, Iron Man 3 provided a window into Tony’s mind. After everything he’d experienced, Iron Man was suffering from post-traumatic stress disorder and experiencing anxiety attacks. In the wake of this, Tony lost much of his confidence and could have easily given up, if not for those that cared for him–namely Pepper (Gwyneth Paltrow), Happy (Jon Favreau), and a kid he befriended named Harley (Ty Simpkins). This was arguably the most human we’d seen any of the Avengers until that point, and it’s exactly what the franchise needed.

Then, in Captain America: Civil War, Tony’s humanity was even more evident. The loss of a parent is something that everyone will handle differently. For Tony, being confronted with devastating new information about the years-old death of his parents is a type of pain we had never seen him have to process before. It drove a wedge between him and Steve when Tony wanted to kill Bucky (Sebastian Stan). “He killed my mom,” Tony told Cap. In that, it was hard not to understand Tony’s grief.

In the end, of course, he didn’t kill Bucky. However, the friendship between Tony and Steve was over–for a while, at least. Which, of course, brings us to Avengers: Endgame and the perfect superhero ending–and one that was earned by Tony.

First, we’re confronted once again with just how fragile the human mind can be. Upon his return to Earth, Tony lashes out at his former friend, calling Steve a liar. Cap always said when the Avengers lost, they’d do it side-by-side. But when the loss actually happened, Tony was alone on Titan. He watched Spider-Man, the teenager he’d become a mentor and father figure to, turn to ash–and Steve Rogers, the man who told Tony he’d always be there for him, was nowhere in sight. It doesn’t matter to Tony that Cap was knee-deep in fighting his own battle against Thanos in Wakanda. Tony is convinced that together, they could have handled the Mad Titan’s threat. Instead, separated, they were defeated, and Tony looked death in the eye as he floated aimlessly through space with his oxygen running out.

Tony’s rage toward Cap shows how the character has changed over the years. In the past, he was driven by logic and his own intelligence. Now, after everything he’s been through, Tony’s lashing out at Steve is illogical and based solely on emotion. He felt abandoned by the man he once called a friend, and it’s understandable why he’d feel that way.

Time heals all wounds, though. And for Tony, that time also gave him the thing he’d been missing since his parents died. Tony Stark got a family, and with it, a new purpose. Marrying Pepper and having a child reframed who Tony was at his core. Suddenly, saving the world and being a superhero wasn’t the most important thing. While the fate of the world was still a major concern, making sure his family remains intact became his top priority. Thus, when he decided to get back into the game as Iron Man one last time, it was with the warning that he was unwilling to throw away what he’d gained in the five years since Thanos snapped away half of the universe.

You can’t blame him for that. Protecting your family is the most human emotion one could possibly have. And, in the end, it didn’t stop Tony from doing what was right for the world at large. When it came down to the final battle with Thanos, Tony was willing to confront his own mortality and snap his own fingers with an Infinity Gauntlet, knowing full well it was something he had little chance of surviving.

It was a full-circle moment for the character, who had come so far from being a weapons manufacturer without a care in the world in the first Iron Man film. In the first Avengers movie, Steve had some harsh words for Tony, who he believed was only there because of his super suit. “I know guys with none of that worth 10 of you,” he told Tony. “And I’ve seen the footage. The only thing you really fight for is yourself. You’re not the guy to make the sacrifice play–to lay down on a wire and let the other guy crawl over you.”

Tony proved time and again that he was the guy willing to sacrifice. And in Endgame, he did it one final time, allowing the character of Tony Stark to have a nearly perfect superhero ending–and, honestly, the only one that could possibly work for the character. Early on in Endgame, Tony considers not putting the time travel technology he’d created to use, while Pepper reminds him that if he didn’t join in the fight to save the humanity that was lost, he’d never be able to rest.

This is a character who has tried time and again over the last decade of MCU films to make the world a better place, though his methods were often flawed. He still never gave up. Even if he desperately wanted to, in the end, he just couldn’t give up the fight. He couldn’t rest knowing there was something he could do to keep his family and the world safe.

When Steve tells him in Civil War, “If I see a situation pointed south, I can’t ignore it. Sometimes, I wish I could.” That’s a statement just as true–if not truer–for Tony by the end of his arc. In the end, he gives his life to save the world, not as Iron Man–despite his final words–but as Tony Stark. With that, Pepper tells him, “You can rest now.” His mission is complete. And his funeral brings his presence in the MCU full circle. Tony was the beginning of the Infinity Saga, and now he’s the end.

Of course, it’s by his wife and child, the Avengers and assorted superheroes. More telling, though, is the presence of Harley. The little boy Tony met and befriended in Iron Man 3 is nearly an adult now and including him in the group attending the funeral really shows drives home how important Tony Stark was to the world, whether he was wearing his Iron Man armor or not.

How A Total War Saga: Troy blends myth and reality 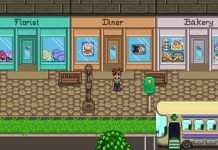 This mod restores the majority of cut content from The Elder...

Tamagotchi Is Returning With a 20th Anniversary Line

San Diego Comic-Con 2018 Friday Schedule: A Guide To The Must-See...

Halloween Costumes Based On Your Favorite Video Game Characters